For late bloomer contractors still holding off on getting RRP Certified in Mass we have two training this week. The Mass/EPA RRP class on Tuesday 2/28/2012 still has a few seats open. Class qualifies for 8 CEU credits for Mass CSL's.

Some Mass contractors have their head in the sand and are ignoring the Mass RRP Law, OSHA Medical Monitoring and Respiratory Standards. 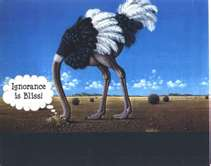 Many contractors are keeping their heads in the sand and do not want to obtain their Mass Lead Safe Renovation Contractor License because of the OSHA Lead in Construction Standard written into the Mass Lead RRP Lead Law. Unfortunately ignorance is not bliss in Massachusetts as we recently learned 24 Mass contractors have been fined for RRP violations. Based on our research Massachusetts is the only state in the country enforcing RRP. In addition the recent Memorandum of Understanding between the EPA and OSHA references that OSHA will help EPA (DLS in Mass) enforce RRP. They talk about the OSHA Lead in Construction Standard in the enforcement document. This class will prepare Mass contractors on what they need to do to meet the OSHA requirements and the Mass RRP Lead Law statute. (454 CMR 22.00)

A contractor from New York said to me tonight the EPA has gone underground with the illegal contractors and is no where to be found!