The chart below shows Sub-part M residential construction specific violations. The OSHA inspectors are stopping by any residential job they see upon their route and looking for hazards that violate the fall protection standard.

Since the new administration took over there is a new shift towards increased enforcement. I have seen this first hand and was told directly by an OSHA manager this is true. You may recall a former post where Shawn McCadden, Darcy Cook of Safety Trainers, Inc  and I were invited to an OSHA/Mass RRP workshop at UMass last September. The manager Mary Hoye from West Springfield OSHA said that OSHA Headquarters has changed their enforcement approach. She said the old OSHA approach of educate first and penalize second has changed to penalize and fine first and educate later.

Shawn McCadden raised his hand and asked her;

"let me make sure I heard this right; Ms Hoye you are saying that when OSHA sees a violation on a job site they are going to penalize first and educate second?" Ms. Hoye responded in the affirmative.

The chart below is evidence that what we were told last year at UMass is actually happening especially on the fall protection front. For these reasons it is very important that residential contractors assess their companies and make sure that they are operating within the parameters of OSHA standards.  Unfortunately, according to OSHA ignorance or not knowing is not an excuse for not protecting your workers.

The deadline for Fall Protection compliance is 9/15/2011. We have several dates for  trainings listed for those who want to protect their assets and reduce the risk of failing an OSHA fall protection audit. Please spread the word as OSHA has done little to make sure the word was sent along channels that would reach the residential contractor. 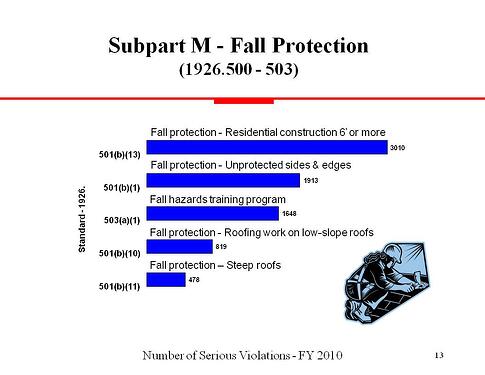 Stay tuned for more posts on OSHA related activity on enforcement and compliance.