31 states said no to sprinklers, contractors, what will Mass do?

On 12/13/2011 I testified on behalf of EMNARI and the remodeling industry at the BBRS hearing opposing the Massachusetts Stretch Sprinkler Code provision. I was fortunate to be the first contractor representative to speak right after state representative Matt Beaton who is a NARI member and remodeling contractor. As I looked up at the board on each end I saw a Fire Chief in full uniform and wondered do Mass contractors really have a shot at going up against the big union machine to stop the sprinkler mandates?

I am happy to share that the residential construction industry in Massachusetts was well represented. There were over 30 building officials and I estimate at least 40 plus contractors. There was a terrific turnout from the Home Builders Association of Massachusetts. We definitely out numbered the Fire Officials.

Many contractors and building officials took the Fire Chiefs and supporters to task on the claim that Building Officials and the BBRS are allowing substandard new homes to be built without sprinklers. You may have heard that there was an add campaign in October and November paid for by organizations who stand to benefit immensely if sprinklers are approved for one and two family new construction homes. The radio adds and newspaper articles stated that the BBRS and Mass Building Officials allow contractors to build substandard homes and they also do not care about fireman safety or homeowners. I am saying this mildly however there were some very disgruntled contractors and building officials who looked the board in the eye and said how unhappy they were that this tactic was used to insult Mass Building Officials and Professional Contractors. One gentleman said emphatically of course building officials care about the safety of fireman and homeowners! Many opponents shared that homes are safer now because of Building Officials, the BBRS, The code and professional builders and remodelers.

31 States have so far said no to sprinklers (blue). Only California and Virginia (red) have decided to force sprinklers on their residents. What will Massachusetts do?  See the map 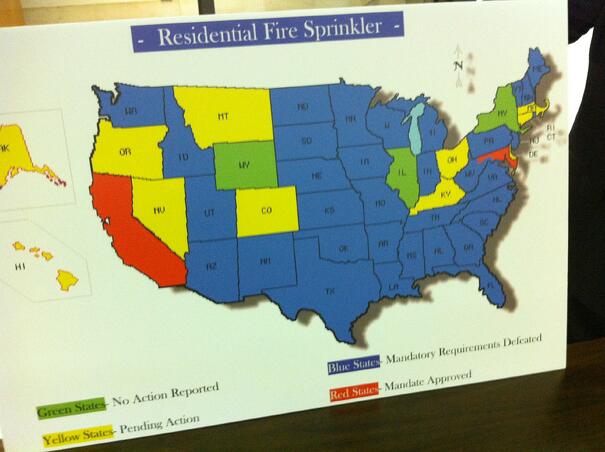 Please contact the BBRS and let them know how you feel about the Sprinkler Mandate in Massachusetts. We need your help to make sure that sprinklers do not end up in the building code for 1 and 2 family new construction homes under 14,400 sq ft. If it gets approved for new construction how long do you think it will take before it is required in existing homes? Remember how hard wired smoke detectors happened?

You can offer a public statement to Mike Guigli of the BBRS who is on the board. Here is Mike's email. mike.guigli@state.ma.us