Republicans seeking to reinstate RRP OPT OUT and preserve JOBS

Today Senator Inhofe (R) introduced Bill 2148 seeking to reinstate the RRP Opt Out removed when the Sierra Club sued the EPA in 2009.  As you may recall the original RRP Law included an OPT OUT Provision which allowed homeowners without children under 6 and pregnant women living in the home, the choice to forgo the costs of RRP work on top of the cost of renovations.

Here is the slide from the manual; 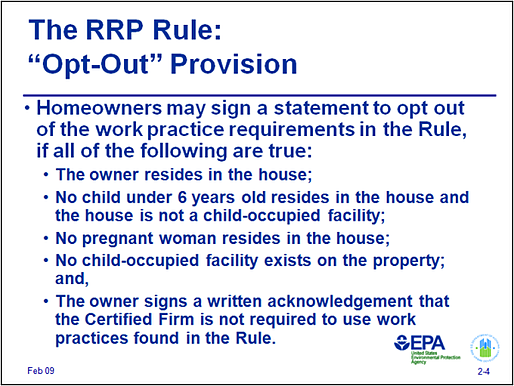 This provision was included in the RRP law and in the calculations by the OMB. Then with it's inclusion it was approved by Congress. When the EPA was sued by the Sierra Club and lost they removed the provision without the consent of Congress. This was all done without submitting the bill back to OMB to see how much it would add to the legislation. Any major legislation that impacts the country must be submitted to the OMB before it is voted on by Congress. RRP was approved with OPT OUT. With OPT OUT removed millions of homes not requiring RRP practices (no kids under six or pregnant women) became mandatory RRP homes. This was shoved down the throats of the residential construction industry and the taxpayer without a resubmission back to OMB and a subsequent re-vote by Congress. It is estimated by the NAR that removing the OPT OUT added 1.3 Billion dollars to the cost of RRP!

A quote from Senator Inhofe.....

"I am pleased to introduce an important bill which will ensure that EPA's Lead Renovation, Repair and Painting Rule (LLRP) is workable so that everyone can comply and we are providing the intended health benefits," Senator Inhofe said.  "I have always supported the intent of LLRP, which is to protect children and pregnant women from lead exposure, but EPA's implementation of the rule has long been botched and in need of a legislative fix.  Today we have a bill that will make sure that those who are most vulnerable to lead exposure receive the full health protections of this rule.
"This legislation is the latest effort in a series of improvements my colleagues and I have been able to secure for LRRP, and I look forward to working with them to pass a bill that is sure to have bipartisan support."
The Lead Exposure Reduction Amendments Act of 2012

Here are the highlights of the bill;

The bill was sent to committee. If you want to make sure your voice is heard tell your Senator to support the bill and protect residential construction jobs. Please support your trade associations in their effort to reinstate the OPT OUT Provision.