Hot of the press; the EPA announced yesterday that due to pending changes to the RRP Refresher training requirements that they are extending the time to renew RRP certifications. In January the EPA proposed rule changes that would change the requirements for RRP Refresher Training. One proposed change is to remove the hands on training component from the training curriculum which will help with online training and help trainers not have to dedicate helper trainers to meet the student instructor ratios. 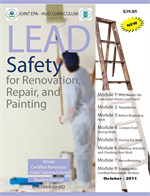 In RRP authorized states like Massachusetts there are no ratios or  hands on training requirements for the RRP Refresher Course.  However in Mass there is currently no extension requiring everyone to get re-certified before the five year anniversary date.

I suspect that there will be some contractors grumbling about not getting another year to renew like the rest of the country.

Here are the highlights Under the final rule:

*   Individual renovators who received certification between April 1, 2010 and March 31, 2011, will have one year added to their 5-year certification.

*   Subsequent certifications for renovators receiving the extension will be five years.