Last week I met the head of OSHA Construction at the Hanley Wood National Remodeling Leadership Conference. He said Fall Protection violations in the residential construction industry continues to be the number one most cited standard. He said they are doing all they can to change this result but admitted that they are a small agency and they are relying more and more on complaints and referrals. In fact 25% of job site audits come from complaints and referrals. He suggested contractors need to step up and make sure they provide fall protection training for their employees.

Note; Also don't forget that you, the general contractor need to make sure your subcontractors work safe on your job site or you can be fined with them.

Where do referrals and complaints come from? (EVERYWHERE)

In this picture taken by someone riding by a new home build on Beacon St. in Newton, Ma. the men are using spruce planks, have no guard rails, are using a man made basket, men on the roof with no fall protection, no hard hats and no safety glasses.

When some concerned individual rides by your job site what will they see? 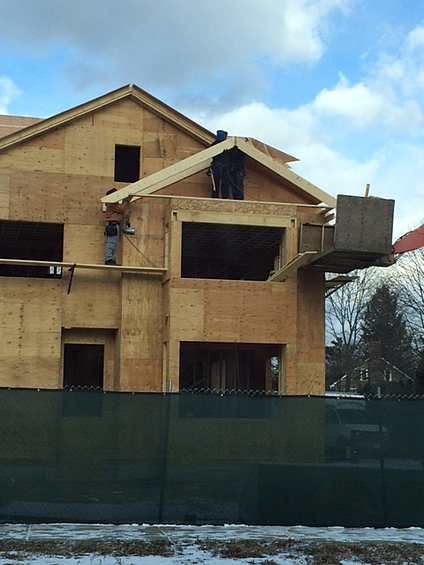 A contractor client who recently got fined for failure to provide FP, told us that OSHA got a complaint and visited several contractors in Hatfield, Ma. He doubts they would have known or found his project because he was working on a house at the end of a dead end street. He was cited and fined. The complaint call came from another contractor.

OSHA has stepped up its ability to enforce by promoting whistle blowing incessantly. You never know when someone will call on you.

With remodeling and new home construction work heating up in Massachusetts the likelihood of someone seeing your job site and calling on you is high. Complaints and referrals are coming from workers, subcontractors, people riding by, other enforcement agencies, municipal workers like fireman and police, building officials and average citizens.

To not present for violations (see post on 12 steps) contractors need to make sure that their employees are trained and  working safely. Also make sure you never allow subcontractors to work unsafe on your projects.Be especially careful with roofers, painters, framers, gutter installers, siding installers and masons.

FYI; Our next Fall Protection Training is June 2, 2015 at National Lumber in Mansfield, Ma. To register click HERE