Homeowner finds out insurance policy will not pay for code updates

Buyer beware, not all insurance policies and estimates cover the cost of code updates when there is a property damage claim on an older home. Recently when I was helping out a contractor with an insurance estimate for his homeowner client, we learned that the repairs would trigger significant code updates that were not covered in what was called a PLATINUM POLICY!. The policy was written by Metropolitan Insurance.

The home built in the 1950's, sustained significant damage to the cantilevered rear balcony and solarium room with a glass roof. Ice formed above in the gutter which let go and tore of a wood balcony and crashed down upon the roof of the glass room. 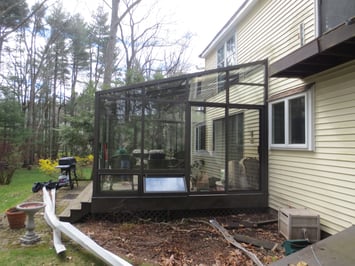 Another low ball estimate from the insurance company using Xactimate

The first estimate from the adjuster from another part of the country, was deficient on obvious and visible scope of work then cost. This estimate was $14,000.00. The adjuster claimed that the room could be repaired by replacing the bent extrusions and replacing the glass. Problem was the company doe not make the room any longer and the glass would not meet the energy code. In addition the structure does meet Massachusetts snow load requirements.

Like thousands of claims in Massachusetts the estimate was put together using the insurance company cloaking pricing device, Xactimate. Insurance companies across the country have successfully kept homeowner claim payouts low using this software. They manipulate the insurance estimates leaving out covered items on purpose. Homeowners and contractors are often confused by the format and the estimates are usually too low to hire licensed and insured contractors.

One remodeler who came to our Insurance Claim Workshop said he has successfully helped his homeowner clients double the estimate amounts on 15 claims this year  Even though it is 7 months since the winter of 2015 we are still getting calls for claims that are not settled. Every claim still hanging around is too low on scope of work and price. Contractor estimates are two to three times the amount of the initial insurance claim estimate.

Another remodeler who came to our Hands On Estimating Workshop saved a homeowner using one of the estimating templates from the class. The intitial claim scope of work and subsequent pricing doubled. His client said he was a hero!

Fair settlement after we called out the insurance company..

Fortunately, I was successful, based upon the facts, in proving that the insurance adjuster needed to increase the scope of work and pricing to bring the insured back to their pre-loss condition on items covered in the policy. After reviewing our detailed critical path estimate, prepared on an excel workbook, the new company adjuster increased the scope and estimate to $96,000.00. The homeowner was elated with my contractor client.

However the elation was short lived when the adjuster informed us that there is no code update coverage. It turned out even though he agreed to cover the entire 16' x 13' solariam room he would not cover the cost of new footings, base floor frame, updated insulation and glass. The room was built in the late 80's and was built on pole footings. The code now requires new footings and updated energy compliance. To add to the dilemna the room was built over the septic system!

The homeowner will have to kick in thousands of dollars to deal with the code issues.

The homeowner said she was perplexed because when they bought the policy they were assured that this platinum policy covered everything. To her chagrin it did not.

If you are involved in an insurance claim on a home built before today's codes make sure you conduct a code review and determine if the damage repairs will trigger code updates. Then ask the homeowner to find out from their agent if they have an endorsement for ordinance or law or code upgrade. If they do the cost for code updates will be stated in the endorsement. Often the endorsement will say something like 10% or 25% of the value of the dwelling coverage (Coverage A). This amount is the limit of coverage for code updates. Then this coverage will cover the cost of the code upgrades after the homeowner has paid you to do them. In other words the costs must first be incurred by the homeowner and then they must pay you before submitting for reimbursement.

Tip on dealing with claims..

When you help your client on a claim, again remember to assess triggered code updates and prepare a detailed estimate using the critical path estimating method. Then as the homeowner's contractor consultant meet the adjuster and show them why and how the job is suppose to be done to code. Most of all don't lower your scope or price if you know it must be included. That is the homeowner's problem not yours. By doing your estimate thoroughly you will have ammunition and confidence to stand by your estimate.

TIP; to prepare a detailed estimate and code assessment, charge a lump sum or per hour consultation fee. You are the licensed contractor, who knows better than you what is required to fix a storm damaged home? If they don't agree to the fee move on.