In 2015 a Boston area remodeler was approached by a homeowner who was the recipient of a low ball insurance claim estimate. The first offer from the insurance company was $40,000.00. After the remodeler took our Insurance Claim Workshop and used the tools learned in the class, the claim was settled for the right scope of work and price of $140,000.00

Many of us remember In 2015, the Boston area was hit with 9 feet of snow over five weeks. This home in Sharon, Mass had damage in 80% of the interior rooms and the exterior masonite siding had ice formations between the sheathing and back side of the panels. When the ice melted the the siding did not go back to its former flat position. The insurance company adjuster left out siding repairs and we showed the homeowner that the siding was damaged beyond repair. In addition the Masonite fiberboard siding is no longer manufactured. This meant that in order to repair the home to the same pre-loss condition prior to the ice damage, all the siding had to be replaced.

In order to clearly show the dam 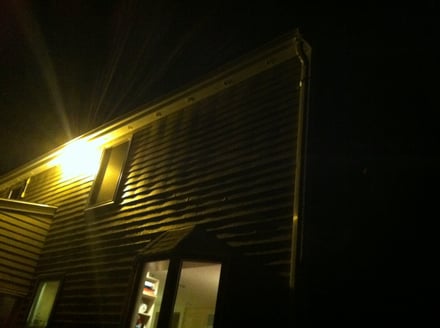 age the remodeler took a picture of the home at night with the flood lights on. This illuminated the ripples in the siding. With this information and an estimate to replace all siding, the insurance company agreed to include all siding in the final estimate.

Ice dams in February 2015; In this picture you can the residual effects of ice formations under masonite siding. The melting ice penetrated the backside of the fiberboard siding causing it to swell. Because the masonite siding is no longer manufactured the insurance company had to restore the house to the pre-loss condition by replacing and painting all siding  on the 40 square house.

On the inside of the house the first insurance company adjuster low balled the scope and pricing in numerous areas. In the rear 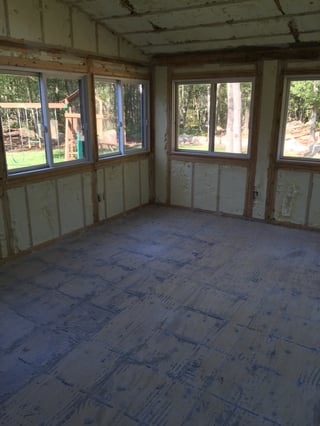 sun porch he suggested that the room be gutted and redone by a contractor recommended by the insurance company. This insurance company hired gun botched the job. He installed open cell foam under the cathedral plywood roof in zone 5. Open cell lets moisture through and would cause condensing on the underside of the plywood leading to deck failure. We pointed this out to the insurance company and they agreed to let us remove the open cell and replace it with closed cell.

After the insurance company paid the claim the homeowner started the repairs and added a master bathroom to the scope. Then instead of repairing the sun porch the homeowner decided to add their own funds to the insurance amount and replace the room with a new addition including residing the house with new clapboard siding.

The project is now well over $200,000. This remodeler is a contractor consultant and helped his homeowner client obtain a fair settlement from the insurance company and was rewarded for protecting them. The remodeler, a licensed Massachusetts builder, developed a complete scope of work and cost assessment to repair all damages from the ice dams. His thorough assessment exposed deficencies in the insurance company's scope of work.

Are you ready to help your homeowner clients this winter?

With the winter just around the corner we have scheduled two Insurance Claim Workshops to teach contractors how to skillfully prepare estimates property damage claims. Last we taught 90 contractors how to work as a contractor consultant to help their homeowner clients.

For more information on our workshop click the following links.